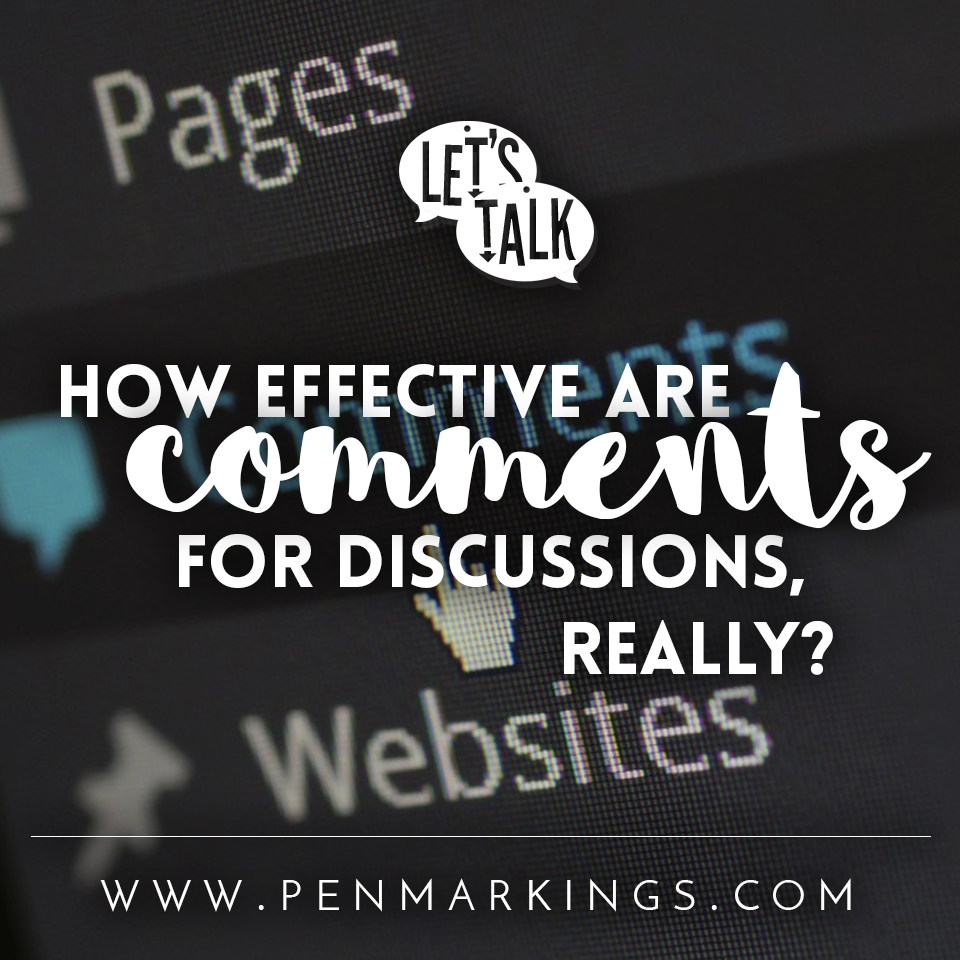 While I don’t really remember the post I read, I knew it was one of those discussion posts that questioned some things and I remember thinking: oh, the comments will be great for this one.

I love reading comments, especially when people discuss things. Why? Don’t ask me. I hardly know why I do what I do. I’m pretty sure my mom has a better idea of how I work than I do.

But anyway, I’ve always thought comments to be rich with discussions, people going back and forth, back and forth as they debated the post and the stars above while they were at it.

So imagine my surprise when I got to them.

Sure, there were a lot. That blog was huuuuuuge. It’s like twenty of my blogs mashed together + a whole lot more snark. I like snark. I strive to add more snark to my everyday life.

But they were comments, with only one reply, and after that, nothing.

Isn’t the main point of posting discussion points… discussing? Arguing, debating, just having conversations about the post?  Isn’t it?

But when you have only a single reply – which is from the author of the post, because politeness and stuff – it doesn’t leave much room for discussing. There usually isn’t a discussion. And I’ve spotted this on so. many. blogs. The huge ones, the small ones, the in-between ones, all of them.

The lack of discussion is so disheartening.

I post discussions because I love reading your thoughts. I LOVE to hear what you have to say because people think about things so differently and I LOVE hearing other people’s POVs and thoughts! But it’s really hard to strike up a riveting conversation in comments, and I feel like I’ve got a grasp on (at least part of) the problem).

Right now, to comment on a blog, I’d have to go to the bottom on a post, type the answer, swear as the blog EATS my comment and retype it, then post it again. THEN I have to wait for an email of your reply – or, if there’s no email, obsessively reload the page until you reply – and comment again. Rinse and repeat.

WHO WANTS TO GO THROUGH ALL THAT?

At this point in life, interaction is so. easy.

It’s a simple tweet, sent within three seconds and an answer received in five.

It’s a quick DM, which is bound to get answered any minute now.

Come now. How many of you interact through comments? Like, ACTUAL DISCUSSIONS. Not one-off snippets of chit-chat. Actual conversations. I can say that I think I’ve had only… one? One proper discussion that solicited more than a single reply from each of us.

I AM NO SOCIAL BUTTERFLY. If I was, I’d be the one who’d stay in their cocoon for an extra six months because SOCIALIZING DOES NOT FIT ME.

But Twitter makes everything so so so so so easy, simple, and quick. Isn’t that what we’re looking for in this day and age? The fastest, quickest, most efficient way of doing stuff?

And I’ve seen a staggering amount of people who admit that most of their friends have been met through Twitter WHICH IS DEFINITELY OKAY! I think all my friends have been met through Twitter, and I have no regrets there. But they rarely comment on my blog, and I theirs. Yet when they retweet my post or shoot me a quick @ on Twitter about it, that’s when I know they’ve read it, and we can have a discussion there.

The point of this post, I’ll be honest, is a bit mish-mashed. It’s part expressing shock at the lack of comment discussions, and part expressing my thoughts that at this point, comments might simply be a thing of the past.
The comments I get, I treasure. Truly. This blog isn’t huge and I’m thankful for every single comment I get.

But I’m just trying to pose the question: will, in time, comments become obsolete? Will social media like Twitter completely take over this aspect of blogging interaction?

21 thoughts on “How Effective Are Comments for Discussion, Really?”